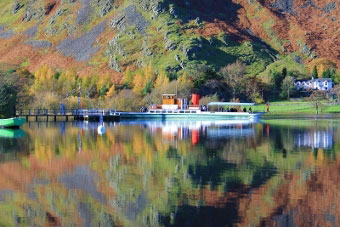 Ullswater Valley is home to the Ullswater Steamers; beautiful paddle steamboats that will whisk you off to simpler time, long ago. The first Steamer on Ullswater that we are aware of dates back to 1859. So if you enjoy seeing the beautiful lakes in a way that captures the magic and nostalgia of the 1900’s then this is the only way to travel.

The valley’s beauty has inspired many famous artists and poets such as William Wordsworth and Turner, so be prepared to have your eyes opened to awe inspiring natural beauty, enhanced by this very unique form of travel. On these Ullswater steamer routes you will visit historic landmarks and hear ancient stories and legends. The even have a commentary app  available, so you can find out more about the area and expand on their story.

Ullswater really is a spectacular place to visit no matter the season you decide to come, Ullswater Steamers have put together some points of interest so you can better plan your adventure. The cruises connect to some of the most famous and spectacular walking routes in Lake District National Park including the epic round the lake 20 mile footpath, waymarked with the famous daffodil symbols called the Ullswater Way.

Below are the steamboats you will likely see on Ullswater. Make sure you look out for them. This information is taken from the Ullswater Steamers website. 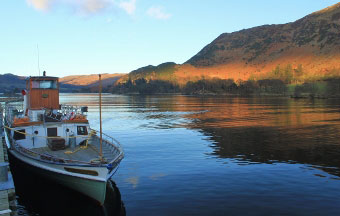 M.Y Lady of the Lake

Launched on 26th June 1877, she is believed to be the oldest working passenger vessel in the world. She was designed by Mr Douglas Henson of Penrith, built at Rutherglen near Glasgow, transported in three sections by rail to Penrith and thereafter by horse drays to Waterside near Pooley Bridge, where she was assembled. In 1889, she was put to the test as her new sister ship Raven was launched for trials between Sandwick and Patterdale. Much to the delight of her crew, Lady of the Lake arrived first.

Launched on the 16th July 1889, her arrival was directly inspired by the tour operator Thomas Cook who voiced his concerns to the Directors about the need for a second vessel during the peak holiday season. She was named after Ravencragg, home of Company Director W.H Parkin and christened by Miss Winifred Parkin, aged 6, in the customary manner of breaking a bottle of champagne against the bows as the vessel was gliding down the stays into the water.

Built to the order of the Millbrook Steamboat & Trading Co. Ltd in 1935, the Western Belle immediately established herself as the company’s new flagship and for nearly fifty years was the firm favourite on Tamar and Yealm excursions. In 2007 she was purchased from Chris Cruises where she had worked for a time on the River Thames. She was completely refurbished by Ullswater ‘Steamers’, and re-launched onto her new home in early July 2011.

Originally a sea going vessel from Guernsey, she joined the fleet in 2001 which heralded the start of an extended winter timetable. Lady Dorothy was delivered from St Peter Port to Poole Harbour, Dorset and lifted from a low loader onto Ullswater in March 2001. Lady Dorothy is the main vessel in service between Aira Force Pier and Glenridding. We regret that due to the nature of this vessel, we cannot carry wheelchairs or cycles.

Built in 1949 in Dartmouth by the River Dart Steamboat Co. Ltd, she worked on the River Dart and the Plymouth Sound before her arrival at Ullswater in 2007 where she was fully restored and renamed by HRH Princess Alexandra. She had previously been known as ‘Berry Castle’, ‘Golden Cormorant’ and ‘Totnes Castle’. Her sister ship ‘Seymour Castle’ previously known as ‘Devon Belle’, went to Dunkirk but never made it to the beaches as part of the Little Ships evacuation in 1940, known in history as Operation Dynamo. 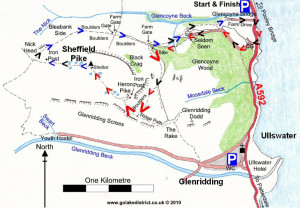 Check out our Sheffield Pike walk for amazing views of Ullswater